What's the difference between ACT and SAT? Part 1: Grammar 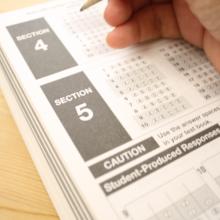 It's summer time -- which not only means it's time for SAT and ACT prep, but it's that time of the year when it seems like every student who is unhappy with his or her SAT scores, wants to try ACT.

My basic advice: pick a test when you begin to prep (take a sample of each -- make an educated decision!), and stick with it.  The tests are different enough that changing course will slow down your progress.  And know that, for most people, the results are about the same (see the stats here), but I'll save that tangent for another post later this week.

But, without prepping both tests, how do you figure out the real differences?  Best answer: talk to someone who has prepped (or preps others) for both.

So, starting with the grammar (called English on the ACT and Writing on the SAT), how do these two sections compare?

Let's start with format.  SAT's Writing section includes an essay by default.  ACT's essay is separate and scored separately.  But, since both tests have essays, we'll deal with essays in another post and focus on multiple choice here.

SAT's multiple choice writing questions are found in two sections.  A long 25 minute section (35 questions) with three types of questions: find the error, fix the sentence, and fix the passage and one short 10 minute (14 question) section with just fix the sentence questions.  All of but the 5 "fix the passage" questions are stand-alone sentences that require no context.  The "fix the passage" can get a little subjective (typically because they offer limited choices to fix particular sentences in a passage which is pretty bad to begin with!), but, although sometimes tricky and esoteric, the "find the error" and "fix the sentence" questions are fairly straightforward tests of grammar and usage knowledge (although, unless a student speaks very formally, many of the "wrong" sentences will sound perfectly fine to the unprepped ear).

ACT's multiple choice English questions are found in one 45 minute section (75 questions).  That section includes five passages in which they embed all kinds of errors.  Because it inserts all of its questions in passages, ACT has a lot more flexibility when it comes to asking students to think about context and the overall organization of passages.  That means that some questions are easier (if you read the passage, you see the error) but they can also be more subjective (is that sentence really redundant?  Is that terrible paragraph really better at the beginning than the end of the passage?).

Both ACT and SAT focus mostly on grammar with a few attempts to capture style or organization in writing (both of which are much harder to test with multiple choice questions than grammar rules are!).  Look at the following table to see what kinds of grammar and usage questions each test uses.

What about the trickiness and the difficulty level?

The ACT grammar section is probably a tiny bit easier than the SAT grammar section.  A native English speaker, which a good sense of formal English (not just spoken teenage English) tends to do a little better cold on ACT than SAT.  And that same test taker can improve tremendously in just a few tutoring sessions that focus on showing that student what grammar rules to look out for.  I've seen a student nearly double her score after just one tutoring session.  She knew the rules, she just wasn't on the lookout for them the first time through.

SAT sentences tend to be a bit more obtuse and trip students up more.  However, if students are good readers, SAT is a little more clear cut.  A typtical students may not know off-hand that it is correct to say, "independent of other factors" rather than "independent by other factors,"  but any student can learn that rule and it will always be true.  Those are the "tricky" questions on SAT.

ACT relies more on style.  So, on ACT the phrase "a problem that needs to be solved" is correctly changed to "a problem" to avoid redundancy.  A good writer knows this.  But, given that the passages in ACT's reading section could easily contain that kind of redundancy, it feels a little unfair.  Or, how about "a prestigiously acclaimed boarding school."  Is that redundant?  The grammar is correct (an adverb modifying an adjecctive), but ACT wants just "a prestigious boarding school."  I too think that's a better phrase, but I have a harder time convincing high school students to read the first phrase as clearly wrong. It's just wrong-ish, and it seems a little mean to test students on things that are just wrong-ish

SAT has this kind of subjectiveness in the last five questions of the first writing section.  But, it's only fivequestions;  they're grouped together and quarantined.  I kind of like that better.

Finally, what about timing?

SAT gives you more time per question (almost 43 seconds per question compared to ACT's 36 seconds per question).  And, that disparity is significant, because although the reading is a little easier on ACT, you have to read the whole passages to answer a lot of questions.  Going back over several paragraphs will slow you down.  So, for slow test takers, ACT is harder just due to timing.

But, SAT uses more difficult phrasing and vocabulary, so for students who struggle more with reading comprehension and vocab, ACT might still be easier.

Overall, I lean with saying ACT English is a smidge easier than SAT Writing but... one more table just to be specific:

So, slight edge to ACT here, but it does depend on the student.  And, because this section relies on information that is the least taught in schools (grammar gets very little love compared to math and reading) every student should prep a little and try a sample before deciding that they are horrible at grammar section.  Excepting only students who studied a lot of grammar in high school, very few students find either of these sections easy on the first try.  However, many students get quite good at both of these sections.  I consider these to be some of the very easiest test sections to coach.

Good luck with the decision -- and more posts later this week on other SAT/ACT comparisons!

‹ Welcome to Tiffani's Boost Blog! up Why correct students' spelling? ›